We start this session mid-battle, finishing up combat from last session. This post is in character

Since we had already dispatched most of the bandits in this inn, once the compulsion wore off,  I convinced this bandit--whom we decided to name “Scruffy” for some reason?--to give up the fight. Quilla shot him with a bolt of fire, saying “I’ll just kill him a little bit.” Fortunately, she didn’t ACTUALLY kill him. Most of his friends were dead, so he decided to listen to reason. After handing over his weapon, we decided to have a chat.

I asked Scruffy to elucidate a bit on his earlier statement. He seemed to think that I was another one of those “chosen”, because the others “looked like me.” However, when I asked if he meant that they were drow as well, he was uncertain. He doesn’t know the word, and seems to be completely unfamiliar with dark elves, other than we are “not as pale as most elves.” Lovely. I’m inclined to believe that they ARE drow though, “Priestess of the Forgotten Dark” sounds like it would be some sort of drow order. Not one i’m familiar with though.

At any rate, Scruffy told us that these 7 other “chosen” were supposed to help the boss with some sort of ritual. They weren’t sure specifically what it was, but I doubt that even if they had given Scruffy a detailed written explanation, he still would not comprehend it. All he knows is that they needed the town “for its magic.” That’s not much of a shock, I guess. A town this small isn’t liable to attract a force of bandits this size for a score this small. So there’s someone with brains, and a plan, pulling the strings here. And this boss has plans that have to do with the ley-lines under the town.

Turns out that this plan with the ley-lines of this town are a part of a ritual to raise Rylen-Razeth. A dracolich. I KNEW I had heard the name before, I just couldn’t place it earlier. To be fair, we were a bit under attack at the time. I guess their boss is someone we kinda knew a bit? His name is Xearthin. Grumpy darven fellow that was a cleric. I guess life has shifted quite a bit for him since all this weird memory business happened. He certainly never seemed like the type to try and summon and control a dracolich. If Xearthin thinks he’s going to control Rylen-Razeth, he’s in for a really rough time. Although, I suppose it could be Rylen-Razeth controlling or influencing him instead? There’s definitely precedent for long dead creatures of immense power to influence others from beyond, and Rylen-Razeth would fit the bill if he became a dracolich. This is going to require a bit more investigation and though, but for now, we have a job to do.

Apparently, Xearthin, in his incredible short-sightedness, is trying to use the Ever Dragon as some sort of vengeance upon a half-elf. A half-elf that plays a pan-flute. Once again the pan-flute comes into play. I wonder if they’re talking about the.. god? Whoever I vaguely remember. Damn this memory block we’re all having. Either way. Scruffy seemed to think that whatever Xearthin was angry at him for, it seemed like it happened a long time ago, or in some other place. He apparently spoke of towns a few towns... Whitehaven and Bellsport. The names don’t mean anything to me right off, but Scruffy also said he’s never heard of them. At this point, however, i’m not convinced that Scruffy had ever heard of a shower. He did say that Xearthin was bragging about things that don’t exist, weird fighting styles, and strange magic. He isn’t making a whole lot of sense anymore, and I feel like Scruffy’s well of information is very quickly running dry. I left Quilla to get any more information out of him that she could think of. Her brain works in strange ways, so she’s bound to think of a couple questions that I wouldn’t have.

Right around this time, there was another bandit that Crash was... keeping entertained in one of the side rooms. He tried to make a break for it, and I was perfectly happy to let him. Just then, however, the tavern keeper decided to make himself known, quickly telling us that there were more of his ilk holding hostages in the few hovels set up to the south. Apparently they had already determined that if things turned sour in this area, they were going to cut ties, and the throats of any innocents who live here, before proceeding to what I can only assume is a plan B city. We may need to look into other areas that have a powerful nexus of ley-lines, but we have priorities. First, we take care of the Thorp.

Since rescuing the townsfolk was half of the job, we couldn’t just allow him to make good on his escape and warn his friends. He was very nearly dead by the time he got close to the door, but at the last minute, I thought it best to let him hang out in the rafters for a little while with a well timed levitation. We finished getting whatever scraps of information we could from Scruffy, and I decided to have a chat with the floating gentleman. He truly didn’t have much more info than Scruffy. Clearly Xearthin was hiring muscle, not brains. He also confirmed the what the barkeep said about the hostages to the south. A troop of 10 or so waiting in the housing to kill the citizenry if anything went wrong.

I decided to let the gentleman down from the ceiling, since he was feeling cooperative. He even decided to gikve me his sword. It only felt fair that I used it to kill him while we fed Scruffy to Abraxus’ spectre. Such a shame, but I guess those other guards to the south won’t get their warning after all. Strangely enough, Crash seemed to be a bit bothered by this turn of events. I never thought him the type to be, but maybe my memory of him is a bit off? I don’t know. I’m not too worried about it though. It was the logical thing to do. If we let either of them go, they would’ve either gone to the others to the south, or their boss to the north. None of these men were innocent, so I have no qualms with my decision to end their lives. Abraxus seemed to agree with me, and Quilla seemed mostly indifferent.  Azure and Anais didn’t have much to say one way or the other about the situation, but I feel that if they had, disapproved they would’ve said so.

Oh yeah. I guess we’re bringing this Ilex fellow with us. He even said he doesn’t want to get paid, he just wants a share of whatever treasure we get. We aren’t after any particular treasure at this point, but I didn’t feel it necessary to burden him with this knowledge. Although, he read the contract, so he has to know that… right? Either way, I don’t mind having him along. He’s kind of a loudmouth, but he seems useful in tight situations. I figure he will either continue to prove himself useful, or we’ll dump him off at some other town where he can go searching for his treasure somewhere else. Makes no difference to me.

After Scruffy and… uh… Floating Guy were dispatched, we decided to take a quick breather and then go to the south and rescue the townsfolk. There were 3 buildings all branched out from a sort of center dirt road area. After a bit of discussion, I decided that I would use a little bit of the intelligence I got from Scruffy. Man… even writing that DOWN felt weird. Anyway. I decided to pose as one of the “Chosen” that Scruffy was talking about. He said they all looked like me, right? So, while most of the others hid I marched right into the center of all 3 buildings and called the soldiers out. Abraxus stood with me, but I don’t think any of them were going to question a Chosen and his bodyguard.

I called the soldiers out under the pretense of preparing to leave the town. I had been sent to gather all of the remaining forces and take them to Xearthin so we could leave. Now, I feel like I should mention that this group of hired hands is not exactly what I would call a top tier group of mercenaries. I called out to them, and my calls were answered by about a dozen more winning personalities. They all came directly outside as I ordered. They lined themselves up as if they were preparing for inspection, but the way they did it clearly showed that these men were in it for the alcohol more than anything else. Three of their number appeared to be captains of a sort. Or, at least, they were outfitted in slightly nicer armor and their gear was in slightly better condition. These three took the front of their respective lines, one from each house, and fell in behind me as if to march up to see the boss.

It was almost enough for me to feel sorry for them when the Abraxus started his incantation and the fireball soared over my head to obliterate the group behind me. I couldn’t see much of what happened, but I heard yells, and screaming, and then I heard nothing but smoldering earth and the remnants of darkened void. It was over in an instant. I guess that’s the trouble with hiring the most idiotic mercenaries you can find. None of them have the good sense to question when they’re being led into a kill box

The rest of this is out of character.
I wanted to attach a couple screenshots here from the tail end of our session, because it just happened too well, and I can't believe that ANY combat plan in D&D ended up exactly the way it was planned for. This may actually be the first time that that's ever happened. 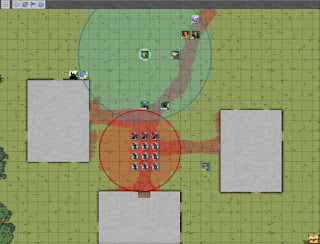 This first image is from just as combat started. My character is the one just to the north of the center point of the red circle. Abraxus was two squares to my left. The greenish square is "Pass Without a Trace", cast by Azure, whom it is centered on. Quilla, Anais, and Abraxus' specter are to the eastern edge of that circle, as is Dancer - the familiar that Ilex uses. and Crash is to the far west of the circle, which his echo in the token just to the west of him. Ilex is standing off by himself in front of the east-most building. He didn't feel the need to be in Azure's spell because he cast invisibility on himself. The red circle that all of the unfortunate fools are in is the "Hunger of Hadar" that Abraxus used this to sort of trigger the surprise round. 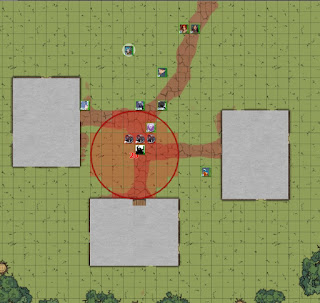 And this... well... this is what happened at the end of the surprise round. 11 of the 12 in the first image are dead - the DM just hadn't removed the tokens yet when I took this screenshot. We ended the session after the surprise round, and even 3 days later, I am still in awe of just how well this plan worked.
at September 29, 2020